If you’ve never heard this expression, it actually means that! If you keep skeletons in your closet they’ll find them! 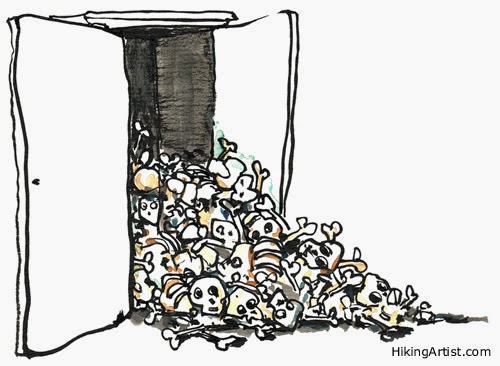 This week the British press have been focusing on a horrific story of a well know public figure, Australian born comedian, artist and entertainer Rolf Harris who for years lived and appeared British television entertaining children and adults alike. He has been convicted with 12 counts for indecent assault on children and has been put in jail for 5 years and 9 months. As I sat and listen to the details narrated by reporters, I couldn’t help but feel different emotions as the story unfolded. Why different emotions? And what was I feeling? Well, first of all Rolf Harris is someone I grew up with since I came to live in Britain, a man who throughout his career focused on bringing happiness to children through his work. This left a chilling feeling inside me thinking how can someone go from being so sweet and kind to children to being literally a child molester, it’s something that doesn’t make sense, I can’t work it out in my mind. Then there is the thought that I’m also a father and it disturb me knowing that this could happen to my children; he was a figure we all trusted and believed as if he cared for kids through his work. As a parent you are always worried about the safety of your kids and keeping them away from this sort of people but when a story so shocking explodes in front of you in the news, leaves you feeling hopeless. I also felt anger, anger because he has got away with it for so long, and no matter what punishment you give him, he is an old man now and has lived his entire life free of guilt and punishment for what he did. And I also felt let down by the system as I heard in the news that he was prosecuted and punished according to the laws of the 1960’s 70’s because that’s when the crimes happened! Yes you are hearing (or rather reading) this correctly! And the sad thing is that the law was a lot linier back then, I guess we hadn’t understood how we should deal with these individuals 40 years ago!

All of those thoughts were going through my head as I watch the news, and every time I saw something about it, I could not help but feel all of these emotions time and time again. Interestingly enough, I also felt sorry for him… I guess I’m only human and cannot help having a balance in my view. Let me explain why I felt sad and sorry for the old man.

Rolf Harris up to now has denied the charges and accusations against him and showed no remorse for what he did, I’m not sure if he is just being cleaver or he genuinely believes he is not guilty. It is interesting to think that he can sit there listening to his victims and genuinely believe he did not cause them harm by sexually assaulting them all those year ago. I guess what makes me sad is that this is only a portion of his private life we now know, and if he doesn’t believe what he is hearing to be true and bad, what else has he done that may be wrong and will, I guarantee you, come out over the next few months and years to haunt him, tarnishing further his reputation and all the good work he did in his clean and almost perfect public life. I am not justifying what he’s done, not at all, on the contrary that’s why I am angry at the legal system that lets him be punished with outdated laws of the 60’s and receiving 5 years and 9 months imprisonment which means he will be out in a couple of years, but his behaviour does show that people sometimes are not conscious of what they do and believe that what they have done is right. You have to be, in my opinion, mentally ill to think that this is not wrong and in desperate need of help.

I decided to call my blog this week “skeletons in your closet “ as I think the biggest learning we can take form this story is that everything you do in your life, will eventually surface and haunt you until you die. Rolf Harris’ terrible actions against children have ruined a whole life of hard work and dedication to his art and sadly he will now be remembered only for his crime. How often have we seen this played out on famous people time and time again? Public figures idolise and respect by many suddenly find themselves being tarnished with an old fling with the wrong person when they were unknown, or accused by actions taken in a misguided youth, or some times crimes you committed and managed to keep under raps finally will catch you up and you will pay for what you did. I guess you don’t have to be famous for this to happen to any of us, although fame seems to bring this to a larger scale because your life belongs to the public who will pass judgement on you!

We all may have skeletons in our closets (big and small); at some point or another we may have done something we shouldn’t have even though it felt right, and we knew at that moment we may regret it one day. Specially when we are young, when we don’t realise that every action we take, every move we make, will reflect in our future and it doesn’t matter how much we think this will not come up at a later stage in our lives, it always does. There is always the possibility that it will come up; that when we least expect it, it will be there staring us in the face, as we regret that moment knowing we cannot change the past.  It may be too late for us to change things we have done in the past and all we can do is pray they will not come back to haunt us, but we can focus on not making the same mistakes we made back then, avoid doing things that one day will be on your doorstep. I want to guide and help my children minimise the mistakes they will make in their youth, and although I can only advice them and help them, they will make their own choices and make mistakes.

One final though on this story, and I have blogged about this before, you cannot judge a book by its cover, you think you know someone and you really don’t. I feel for Rolf Harris’ family who are also the victims of his crimes, they will have to live with his legacy, sadly the wrong one, for the rest of their lives.
Posted by Unknown at 3:53 AM